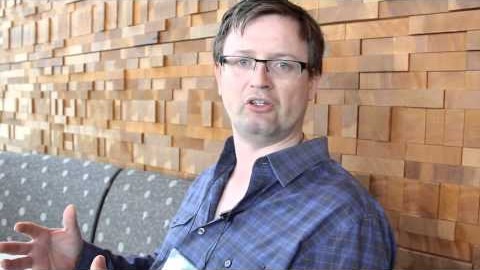 Plenty of Fish is Vancouver dating service, which started in 2003. For first 5 year Markus Frind did all by himself. He started hire some employees when project got 15 million users. These days, Pof.com is leading dating site in United States.

This is slightly edited transcript of selected question from this interview with Markus. Conversation was recorder by Jake Ludington from HasOffers.com and published on August 2012:

Jake Ludington: You are one of the most popular site for affiliates to run offers. Why do you that it is?

Markus Frind: Because we have a lot of traffic and affiliates want run offers where is that traffic.

Jake Ludington: How did you happen to make a transition from, say, using adsense which is completely hands off to something now you have, I assume, hundreds of thousands people buying ads?

Markus Frind: I was really easy actually. Why I should pay adsense all this money every month? So what I did: I sat down and build self-serve ad platform. Then we just posted one picture on WickedFire, we bought ad banner on WickedFire and we has $500 000 in orders in a first week.

Jake Ludington: For other sites which grown as free sites the way you have, I mean most of them probably will not achieve same skill, do you recommend same king of strategy where they move away from adsense model and to a self-serve platform?

Markus Frind: No, we don’t want to make any money (laugh)… but yes, obviously. Adsense is taking 30 – 40% cut, why would you use them? If your platform is big enough and if you have enough users then you can sell that inventory and take that cut and make more money.

Jake Ludington: Your mobile is growing like crazy, but you are not currently monetizing that. That seem like a huge growth opportunity where, I assume, that ads will come soon or you gonna do something.

Markus Frind: I have no idea yet. We will see.

Jake Ludington: So it’s really about make sure that you are where the users are at this point?

Markus Frind: Yes, It’s about giving us as many users as possible, then you can always make money. If you have users, you can make money.

Markus Frind: Mobile traffic jumped from 5% to 60% within one year

These are highlighted ideas of second interview from Grow conference (published on Feb. 2013). I didn’t make a transcript because moderator’s questions are barely audible:

Another interviews with Markus Frind: